By 1865, the Confederate war effort started to wane. As Major General Ulysses S. Grant pushed the Army of Northern Virginia into a long siege at Petersburg, William T. Sherman’s army traversed through Georgia and the Carolinas on a destructive warpath. The two entities sought to end the Confederate war effort by any means necessary, so they deployed what historian Mark Grimsley called “Hard War” tactics to subdue and destroy anything and anyone who stood in the way of ending the Civil War once and for all. In popular history, Sherman is revered in the North as someone who brought the Confederate wartime industry to its knees; while in the South, many consider him a villain that ravaged the innocent livelihoods of the white southern planter elite. However, many do not consider the impact of his march through the eyes of African Americans, free or enslaved, who experienced the visible hand of Confederate destruction in 1864 and 1865.

This project, Mapping Destruction: Sherman’s Army and Slavery in the Carolinas, visualizes how this line of inquiry can help audiences – public and academic – see Sherman’s March in a new way. The overarching goal of this project seeks to take maps from 1860 that visualize slave population density in the American South - produced by Edwin Hergesheimer - and overlay them with hand drawn maps from William T. Sherman’s 1865 campaign in the Carolinas. By examining both bodies of source material, our interactive map showcases the path of Sherman’s Army through counties in North and South Carolina based on the density of enslaved persons. Through this lens of analysis, viewers will be able to make visual connections to how Sherman ultimately chose his path, to destroy the Southern planter elite, and end the Civil War through destructive measures.

One side of the story is missing, and that’s a study of how Sherman’s March affected enslaved communities in this region of the country. 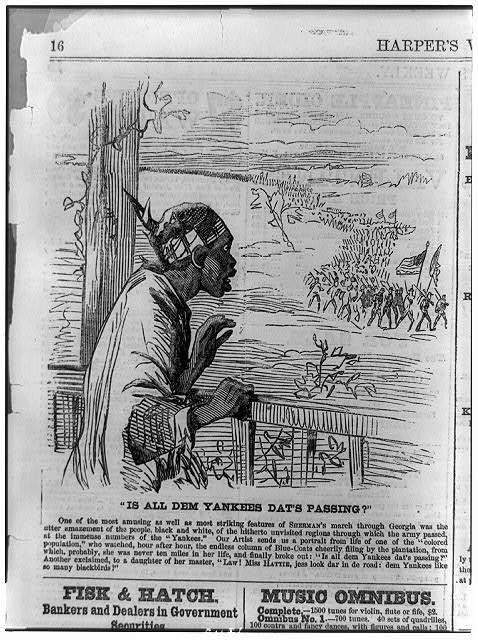 In 1865, Harper’s Weekly published a lithograph image of an African American women viewing the long blue line of federal soldiers marching through Georgia. The image served two purposes: it demonstrated the power that enslaved women experienced when seeing the U.S. Army for the first time, freeing her from bondage, and offering her and her family a new life; it also demonstrated a line of interpretation that made people see African Americans as someone anxiously waiting for freedom without any realization that they, too, were actors in their own emancipation. As this project develops, we hope to provide more stories and experiences of how the enslaved interacted with Sherman’s March to better understand freedom and emancipation at the tail end of the Civil War.

In this first iteration, however, we hope that viewers see the map as a way to interconnect Sherman’s March through the Carolinas with not only an attack at southern agricultural industry and wartime goods, but also as a moment to define emancipation. The 1860 Hergesheimer map of the U.S. South gave William T. Sherman a motive to move through the Carolinas. The planter elite dominated Southern industry that fueled the Confederate war effort, and by using the maps that noted the substantial places that fueled the fire, Sherman could bring the Confederacy to the verge of defeat; and, with that defeat came notions of freedom and emancipation.