Our team compiled from the 1860 Chester County Slave Schedule a list of slave owners and the number of enslaved peoples living on their plantations or farms. We hope to further aggregate this information by gender as time allows. Our research identified 842 entries. The names of the slave owners are present and each slave is identified by their age, sex and color; their names are not included on the slave schedules, except for those who are listed as 100 years of age. Once the metadata was complete, we transferred it to the open access software Open Refine. Open Refine allowed us to group owners by the number of slaves listed and that is how we were able to identify those slave owners who owned 70 more slaves, about 20 people.

Then, we searched the Chester County, South Carolina 1860 Agricultural Census to identify the real estate values assigned to these 20 and to find out how may acres were being farmed on their farms. This additional information made it easier to find these slave owners because the 1860 census includes a column for real estate values. We were able to find most of the 20 listed (variations in name spelling and an incorrect entry for real estate value can make it difficult to find someone on the census).

The Chester County South Carolina 1860 Census provided us with the ages, occupations and post office assignments for our focus group of 20 slave owners. This, in turn, allowed us to approximate the location of the plantations in Chester County, since Colton's South Carolina shows where most of the post offices were located. Even though we were not able to pin point, specifically, a plantation's location, we can identify a general area of reference. A search through South Carolina land records may provide more detailed locations and actual survey information. However, that detailed research must be part of a larger project. 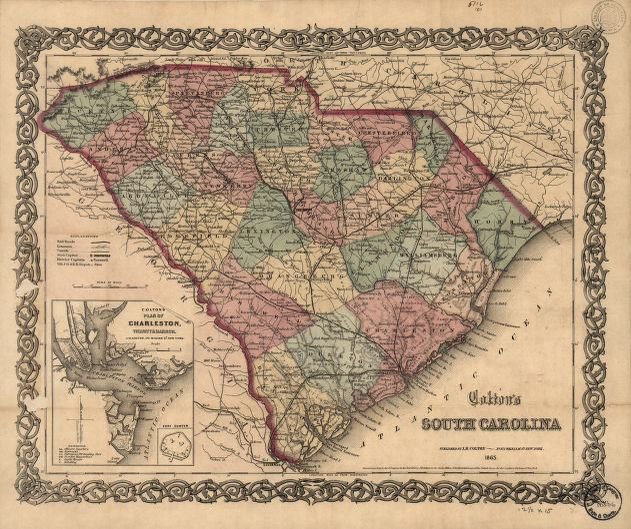 [Colton's South Carolina (1865) identifies each county and uses symbols and text to show toponymic and topographical features. The state's transportation system is current to 1865. The Colton firm identified several towns and villages in South Carolina, including those for Chester County. Post offices were often present in these named localities. The 1860 census identifies the post offices for each district and this information can be used to approximate the location of large plantations. Colton's South Carolina. New York, J. H. Colton, 1865. Map. https://www.loc.gov/item/99447241/.]

[Like many counties in South Carolina there was a significant number of enslaved individuals in Chester County. This a copy of page 119 from the 1860 Chester County Slave Schedule. The slave owners are named as are the enslaved on their properties, who remain nameless, but whose age, sex and color are listed. The National Archives in Washington DC; Washington DC, USA; Eighth Census of the United States 1860; Series Number: M653; Record Group: Records of the Bureau of the Census; Record Group Number: 29]


[This is a close-up shot of the previous entry. The schedule's columns are clearly listed. The National Archives in Washington DC; Washington DC, USA; Eighth Census of the United States 1860; Series Number: M653; Record Group: Records of the Bureau of the Census; Record Group Number: 29]


[The United States 1860 Census lists heads of households and those living within it. Census takers were responsible for recording the following information: names, ages, race, sex, marital status, occupations, real estate value and country of birth. Tscharne Degraffenrie's entry is included on this page, he was a farmer in Chester County who had enslaved over 70 people. Year: 1860; Census Place: Chester, South Carolina; Page: 182; Family History Library Film: 805217 ]


[This image is a close-up of  Tscharne Degraffenrie's entry. He was a farmer whose real estate was valued at $58, 160.00. He was 50 years old, a native of South Carolina who resided in the Chester post office district. Year: 1860; Census Place: Chester, South Carolina; Page: 182; Family History Library Film: 805217] 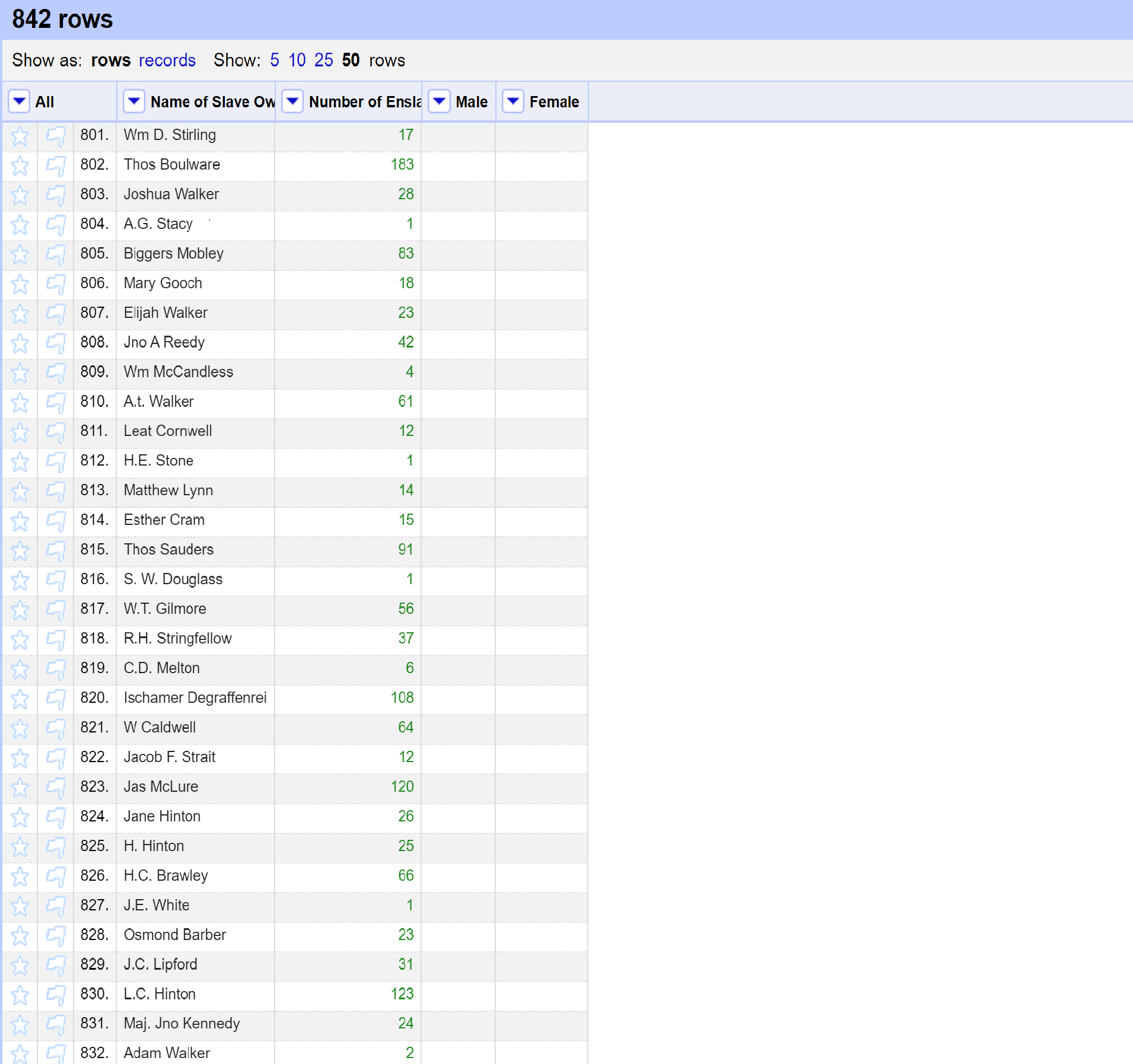 [842 entries were created from the 1860 Slave Schedule for Chester County, South Carolina in the program Open Refine; the data was originally entered into an Excel spreadsheet. The names of the slave owners are listed as are the number of enslaved peoples living on their plantations. Thomas Boulware enslaved the most; the slave schedule lists 183 people under his name.] 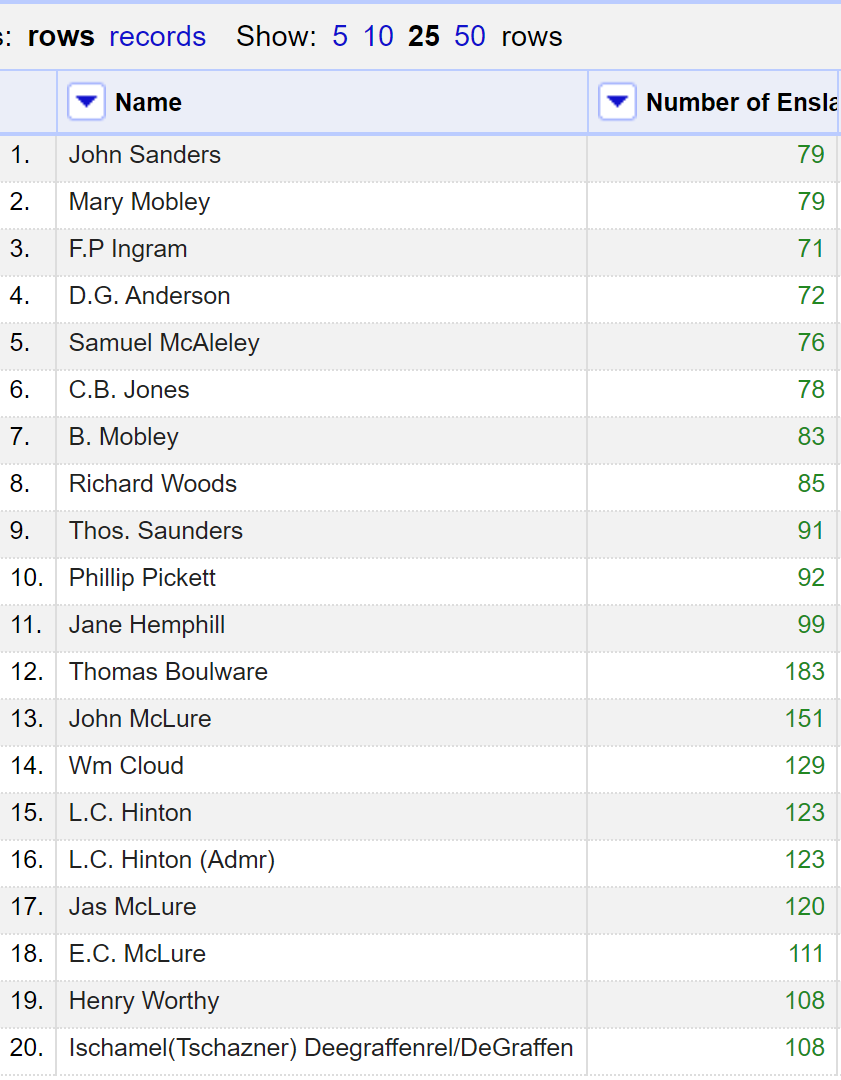 [Once we identified those plantations that included 70 or more enslaved peoples through Open Refine, we accessed the 1860 Agricultural Census from South Carolina to research farm values and the acreage of land under active cultivation. Listed above are those who owned 70 or more peoples.] 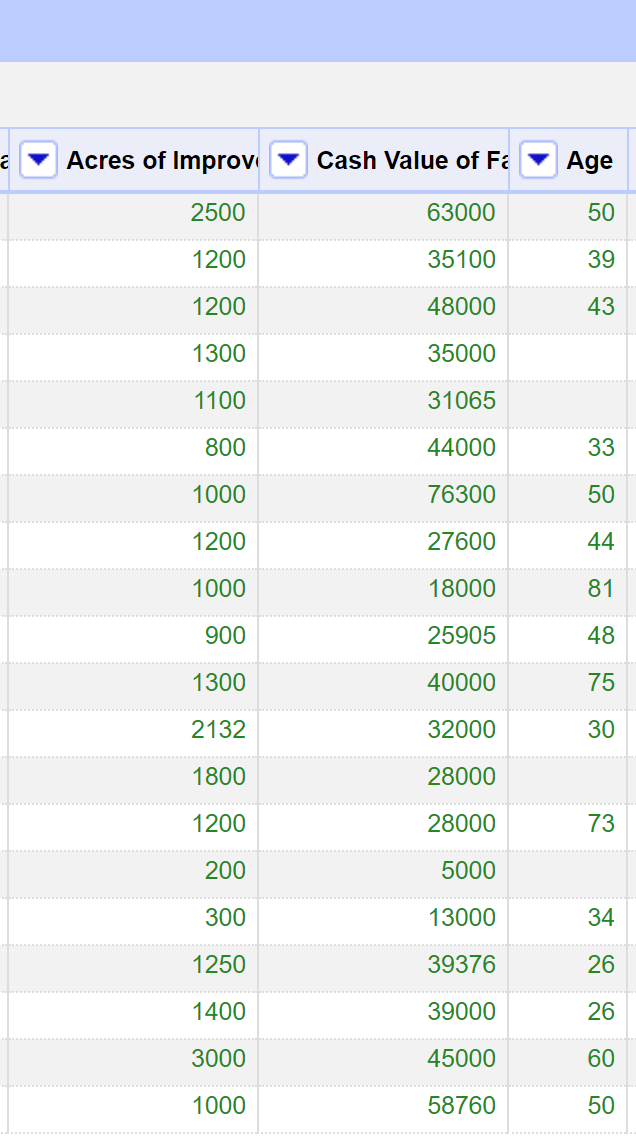 [Listed above are the assigned cash values to real estate properties, acreage under improvement, and ages for the slave owners.]